The benefit of omega 3 fatty acids

All information in this article is for education purposes only. It is not for the diagnosis, treatment, prescription or cure of any disease or health condition.

WellvilleSpa Ultra Omga-3 – 500 EPA- 250 DHA Marine Lipid Concentrate recommended with all programs unless you consume 3 – 4 cans of sardines per week.  EPA and DHA are some of the most important fats you can provide your body for health.  It is not burned for fuel but rather integrated into cell membranes.  People with the highest levels of omega-3 in their blood have a better memory.  Approximately 10% of the human brain size has been lost in the last century due to processed foods and lack of EPA and DHA in the diet.  Omega -3 fatty acids are critical for proper immune system function, and help to maintain cardiovascular and joint health.  Studies concluded: “A higher omega-3 index was associated with reduced risk of both cardiovascular disease and all-cause mortality.”

Dosage: For maintenance, one to three capsules per day.  If you are an athlete, you may not realize you will burn off omega-3 quite rapidly because the DHA is used as fuel rather than going toward your cell membranes.  To remedy a marked deficiency state, three to 5 liquid gel caps per day in divided doses.

Omega-3 fatty acids (EPA/DHA) deficiency may be a contributing factor in many health disorders including:

There are 3 basic forms of omega-3:

Alpha-linolenic acid (ALA) found in English walnuts and vegetable oils like flaxseed, soybean and olive which the body eventually, but in small quantities, converts to DHA.

Docosahexaenoic acid (DHA) found primarily in fish oil, this is the ultimate form of fatty acid in humans. Most people get far too little of this all-important fatty acid, especially since the conversion of ALA to DHA is slow and minimally yielding. Getting a daily dose of of DHA (600 to 1000 mg) from supplements is preferable to reap the health benefits.

An omega-3 index over 8 percent is associated with the lowest risk of death from heart disease. An index below 4 percent, which is common in much of Europe and the U.S., puts you at the highest risk of heart disease-related mortality. Given its importance to your health, it is most definitely worth your time to complete the simple blood test required to determine your omega-3 index. I’ll share more about how to do that later in this article.

Animal sourced omega-3s are your best source for this essential fatty acid and you have the following three options to get more of it into your daily diet:

Another way fish oil omega-3s may help you lose weight is by increasing your metabolism.

Your metabolism can be measured by your metabolic rate, which determines the number of calories you burn each day.

A study by Lembke et al., “Influence of Omega-3 (N3) Index on Performance and Wellbeing in Young Adults after Heavy Eccentric Exercise,” compared the Omega-3 Index of subjects with the incidence of DOMS (delayed onset muscle soreness), which for each participant was measured on a visual scale of 1-10 at 0, 24-, 48-, 72-, and 96 hours post-exercise.

Delayed onset muscle soreness is characterized as a type of soreness that is usually caused by a new or unaccustomed exercise.  The onset of DOMS generally occurs within 24-48 hours following exercise, may be associated with swelling, tenderness and discomfort, and may be experienced up to 1 week following heavy exercise.

After 30 days of supplementation, Group 1 (N=42) moved from an initial average Omega-3 Index of 3.6  up to 5.4 as measured at the start of the exercise portion of the intervention.

The differences in delayed onset muscle soreness for each group were as follows (see chart below): 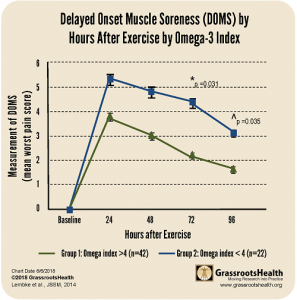 Specific to exercise, the findings of this study “support the hypothesis that higher omega-3 tissue levels may have a protective effect on muscle cells during exercise and may act by reducing the inflammatory response and subsequent DOMS.”

Helps provide the lubrication joints need to function at an effective level. By keeping joints lubed, you experience less grinding and less overall wear and tear – and thereby – less pain as you age.

When omega-6s dominate your diet, you will almost always suffer from inflammation. Omega-6 excess can also increase your production of body fat. Beyond that, many scientists suspect the high incidence of cancer, diabetes, heart disease, hypertension, obesity and premature aging experienced worldwide may have its roots in the chronic inflammation often triggered by an omega-3 to omega-6 mismatch.

A diet high in omega-3 and low in omega-6 will reduce inflammation and when your body is chronically inflamed, you will be unable to achieve optimal health.

As we age, fat cells in our skin’s third layer thin out and tend to get a bit bumpier; omega-3s help make that layer thicker and smooth. Wrinkles are diminished and skin becomes fuller. If you’re experiencing dry, scaly skin, you might just need to add a few more servings of fish into your diet. Omega-3 fatty acids — and particularly eicosapentaenoic acid (EPA) — are essential for healthy skin and hair. EPA helps regulate oil production in your skin. Having plenty of this essential fatty acid in your body keeps your skin hydrated and prevents it from drying and flaking.

The fatty acids not only protect against sun damage, they actually help repair it. When you’re exposed to the sun’s harmful UV rays, EPA can help prevent the release of enzymes that destroy collagen, warding off sagging skin and wrinkles.

When your body is exposed to ultraviolet (UV) radiation from the sun, harmful substances called free radicals are generated, which can damage cells and lead to cancer and premature aging.  Increasing dietary omega-3 fats is an important step towards healing the skin. High levels of omega-3 fatty acids have been shown to decrease inflammation, and may reduce the risk of acne and other skin problems by decreasing insulin-like growth factor (IGF-1) and preventing hyperkeratinization of sebaceous follicles. (2) Conditions such as atopic dermatitis and psoriasis have been shown to be positively affected by supplementation with omega-3s from fish oil, likely due to competitive inhibition of arachidonic acid leading to a reduction in the inflammatory process.  Clinical studies have demonstrated that omega-3
supplementation, especially EPA, is an effective natural solution to protect and rejuvenate the appearance of the skin as well as provide relief to conditions such as acne, atopic dermatitis, eczema, and psoriasis.

It may surprise you to know that an inadequate intake of omega-3 fatty acids contributes to breakout-prone skin. Substitute sugar for avocados, walnuts, salmon or trout to help control acne.  Acne, rosacea, psoriasis, dry skin, and wrinkles are all affected by your diet, and following the Keto Fit 16/8 Program is a great strategy for reducing and even eliminating these skin conditions.

Our eyes’ retinas are a membranous structures and the whole eye is covered in a soft double layer of membranes, making your eyes’ health dependent on the liver (who knew?). The liver helps metabolize fat-soluble vitamins that feed and maintain those membranes. If you’re deficient in DHA, it affects how we see by delaying the system that converts light into neural energy in the retina.

Omega-3s reduce triglycerides, stabilize your heartbeat, make platelets “less sticky” and can even lower blood pressure. The EPA you get with your daily DHA dose helps prevent artery-blocking clots. In the Iowa Nurses Study (and 3 others), 1 ounce of nuts a day decreased the incidence of heart disease between 20 and 60 percent.

Research funded by the National Institutes of Health highlights the importance of your omega-3  level to your heart health and overall well-being. The new study, published in the Journal of Clinical Lipidology,1 looked at the value of measuring blood levels of eicosapentaenoic acid (EPA) and docosahexaenoic acid (DHA) omega-3 fatty acids to assess your risk for developing certain diseases. The outcome? A higher omega-3 index was associated with a lower risk for heart attacks, coronary heart disease and stroke.

In this body of work, led by omega-3 expert and  researcher William Harris, Ph.D., professor of medicine, Sanford School of Medicine, University of South Dakota, the omega-3 index was measured for 2,500 participants (54 percent women) in the offspring cohort of the Framingham Heart Study.2 The omega-3 index reflects the EPA and DHA content of your red blood cell membranes.

All participants, who had an average age of 66 years and were CVD free at baseline, were tracked until about age 73. Besides tracking total mortality, researchers also noted death from CVD, cancer and other causes, as well as any associations between omega-3 index levels and risk of CVD events, fatal or not.

While increased levels of omega-3s have been shown to reduce your CVD risk, the researchers also noted a strong association between the omega-3 index and death from all other causes. Notably, when comparing participant omega-3 index levels, those with the highest levels of omega-3 fatty acids slashed their risk of death from any cause by 34 percent.

This outcome suggests omega-3s provide other beneficial actions beyond the well-known ones associated with a pathological process, such as plaque buildup in your arteries, for example.3 The participants with the highest omega-3 index also had a 39 percent lower risk of suffering a CVD event such as a heart attack or stroke.

Even though the study was somewhat limited by its relatively short follow-up time (median 7.3 years), the researchers concluded: “A higher omega-3 index was associated with reduced risk of both CVD and all-cause mortality.”4

Can your Omega-3 Index be an indicator of how healthy your heart is?

Boosts levels of HDL (the good cholesterol) and helps clear your arteries.

Omega-3 fatty acids Improvesfertility rates in both males and females by improving sperm’s swimming ability and the environment for implantation in women.

Omega-3 fatty acids directly affect brain development, making it crucial for expectant mothers. Additionally, research indicates they decrease a mother’s risk of depression. When the mother doesn’t have enough of these essential fatty acids, the baby borrows from her. Some prenatal vitamins now include omega-3s, so be sure to check the label or grab a handful of walnuts each day.

They found a 31% lower risk of death during the study period if Omega-3 Index was above 8%, as compared to below 4%. 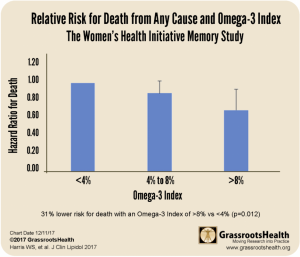 Scientists recommend an Omega-3 Index above 8% for best health. The US has an average Omega-3 Index of around 4%. 8% is the goal, and 4% is the norm. The only way to know what your Omega-3 Index is,  is to test. After you know where you stand, you can then use this calculator to determine an estimate of how much extra omega-3 supplementation you need to achieve your target Omega-3 Index (recommended within the range of 8-12%).

What is the Women’s Health Initiative Memory Study?

It was a randomized controlled trial to test whether hormone therapy over many years had an effect on dementia or Alzheimer’s. The study divided the women into active therapy and control groups and monitored the outcome over many years. Beyond the primary outcome of dementia, the samples collected from the large study cohort and length of follow up allowed for additional analyses, such as this one on the association of Omega-3 Index and total mortality, to be done.